skip to main | skip to sidebar

Samadhi; ,a super conscious experience, a state in which the mind is in communion with divine energy’.

The group formally known as Katmandu, presents a lively blend of east Indian raga's, latin jazz and blues music, featuring Don Pope on sitar and musicians from Canada, Mexico and Brazil. The band was formed in Katmandu, Nepal in 1983 and now resides in Puerto Vallarta, Mexico. Don Pope began his sitar studies in London England at the Charing Cross Institute of Indian Music, then went on to study with renowned Sarod master Aashish Khan (Wonder wall music with Beatle, George Harrison , and the movie Gandi), son of Sarod master Ali Akbar Khan and nephew to the famous sitarist Ravi Shankar.

Aashish recruited Don Pope as the guitarist in his east/west fusion project The Third Eye Band, which led to a tour of India in 1982. with fellow Canadian musician Rhonda Padmos. Don has been a proponant of east/ west fusion music since this time.

Rhonda, a classically trained pianist and jazz vocalist, has recorded her own CD 'A billion years too soon', performed with The Third Eye Band, and Canadian singer, Ann Mortifee, in concert and recorded Ann’s 1991 CD 'Serenade at the doorway'. Rhonda is the pianist, musical director and co-writer of Sitara Samadhi. Other band members are Micheal Mattson, drums and percussion, Oscar Terrasas, soprano sax and flute, Guillermo 'Willow' Brizio ,guitar's, Marcos Milagras, bass guitar.

Sitara Samadhi’ original compositions and improvisations are based on themes, sentiments and stories of India's Dieties, God's, Heroes and Demon's. Also included in our repitiore are Sacred songs from the Vedas, G.I. Gurdjieff and Sufism. Sitara Samadhi have created blues and jazz interpretations of the epic classics of India such as the Ramayana and the Mahabarata. Sitara Samadhi combines it's special fusion of east and west with dancers presenting middle eastern, Indian, yogic, Sufi, modern jazz and flamenco styles to embellish the 'Rasa [feeling of the music].

'' Our intention is not only to allow the listener to enjoy the beautiful sound's of the sitar in combination with jazz and blues instruments but also to take the audience on a '' Super Conscious Experience'' of delight, joy, surprise, sadness, compassion and awe of the great mystery of the Universe , to which we humbly devote our performances’’. 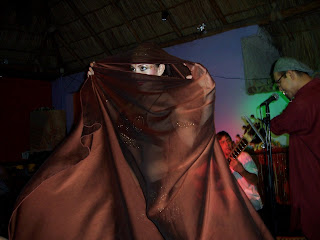 are fine musicians from Canada who have been performing in Puerto Vallarta for over twenty years. In fact, their youngest child was born here and all of their children are fluent in Spanish. The musicians met in a band years ago and first came to Puerto Vallarta on the Love Boat where they worked as entertainers.

You'll enjoy their mix of pop hits with golden oldies on the piano with guitar accompaniment. Rhonda also does vocals for some of the songs in her light, sexy voice. "Killing Me Softly", "Bye Bye Blues", and "Fever" are songs you might hear.
They recently released another CD with their group Katmandu called Raga Maso with Latin rhythms, Indian scales and Jazz, a fusion composed by Don, all original music, featuring some of the finest local musicians.

Donald Richard Pope was a rocker in his home town of Calgary, then on to London where he trained in jazz and classical guitar. His training in the sitar began in Vancouver and on a trip to India in 1981, the group Katmandu was formed. Can you guess where?

Rhonda Padmos also comes from Calgary where she played the piano as soon as she could reach the keyboard, at about five years old. With training in classical music as well as a vocalist, Rhonda has played with Don for over 30 years even while putting out her first solo album "A Billion Years Too Soon" in 1991.

Katmandu released their first album "Amamsté" in 1997 with instrumentals and jazzy solos. Other group members include Oscar Terrazas, who also plays sax and flute in Thierry Blouet Cocina de Autor, Guillermo (Willow) Brizzio on guitar and Michael Mattson on drums and percussion.

Don and Rhonda perform at summer festivals in Canada during the summer, which is also a quieter time in Puerto Vallarta, while during the season they entertain six nights a week since 1986 when they first established a residence in this city.

Sitrara Samadhi would be honored to perform in concert or dancing events either as the full nine piece group, including our dancers or as a quartet, trio, or piano / sitar /vocal duo.